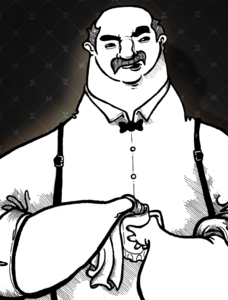 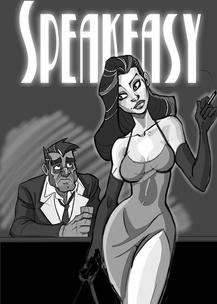 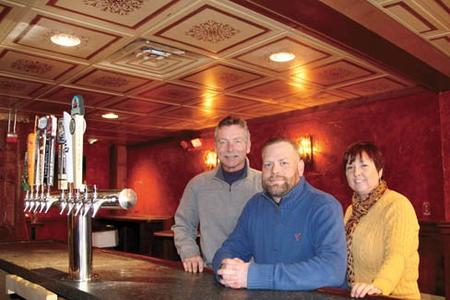 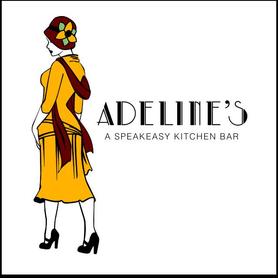 Adelines in Cumberland Hill is now open with new owners, a new menu and a fun theme that harkens back to 13 years of prohibition when America went dry and booze flowed only at secret speakeasies. Set in the rear of what's generally known as the House of Clocks plaza just south of Cumberland High School, the new eatery, Adeline's Speakeasy Kitchen Bar with its new hand-painted walls and ceilings set off by shimmering chandeliers now suggest the look of 1920s America.

This is a family effort. Marc and Lea Berard of Woonsocket bought the business, while Lea Berard's son, Philip Giguere, who started his restaurant career as a teenager, is the hands-on manager who brings the experience of helping to create and manage three earlier restaurants. Additionally, Lea had worked for 15 years at the old Tuck's. Giguere says he's moving to Cumberland. "I'm here to marry this town and so are my parents," he says. Look for Adeline's - named for his grandmother - to sponsor school and sports events around town. "We're here to stay."

The remake here, which features Marc Berard's hand-stenciled ceiling tiles and special wall effects, was far more extensive than first hoped, says Giguere. He ticked off a list that ran from floors to walls to ceilings, and includes electrical, plumbing, three bathrooms and a brand-new kitchen."We took the old kitchen and disposed of it," he says.

Giguere describes the menu as "pub-style comfort food" and promises "the best chicken wings" along with oysters on the half shell, bacon-wrapped meatloaf, pot roast and more.

"We really take food to a new level," he says. Sauces, including even the ketchup, will be homemade. Just for fun, the names of several menu items include a nod to the local area, such as the Woonsocket Rocket arugula salad and the Nate Whipple and Cumberland Hill burgers. The chicken wings are named for the high school Clippers.

Don't look for pizza or chicken Parmesan. Giguere says he's not interested in competing with the nearby Cumberland House of Pizza. He says he's targeting all ages, with seating for 99 and plans for outdoor tables during the summer.

Cocktails popular during the Prohibition era will be featured at the bar where he's promising a quiet place to unwind at the close of the work day. Try a Tom Collins, Gin Rickey, Sidecar and Whiskey Sour, along with today's wines and beers, he suggests. Adeline's will be open seven days a week, 11:30 a.m. to 1 AM.